Menu
Log in
Register
Install the app
You are using an out of date browser. It may not display this or other websites correctly.
You should upgrade or use an alternative browser.

Bravery in the line of duty 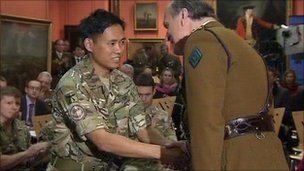 
A Gurkha who single-handedly fought off an attack by at least a dozen Taliban insurgents has been awarded Britain's second highest medal for bravery.
Acting Sergeant Dipprasad Pun used up all of his ammunition and resorted to using his machine gun tripod to repel the attack in Afghanistan in September.
The Gurkha, 31, of Ashford, Kent, said he was a "lucky guy" and very proud to get the Conspicuous Gallantry Cross.
A total of 136 UK servicemen and women are being honoured, four posthumously.
Last edited: Jun 1, 2011
M